What use will there be for green hydrogen, the so-called ‘energy of the future’?

Hydrogen is the most abundant element present in the Universe, it is found combined with other elements and constitutes approximately 75% of its total material.

Hydrogen is mainly used by the chemical and refining industries, and global demand in 2019 amounted to 70 million tonnes, according to the International Energy Agency. Most of this hydrogen is known as grey hydrogen, which is produced by the steam reforming of natural gas. This process produces CO2, which means it is not an emission-free process.

With a view to a decarbonised economy, the type on which most expectations are being placed is green hydrogen, which is obtained from renewable sources, such as solar or wind, and mainly through the electrolysis of water.

One of its most outstanding advantages is that it is a 100% clean energy, with zero CO2 emissions in its production – only water vapour is emitted. Moreover, it has multiple applications as an energy source across all sectors, even those where electrification is difficult, such as heavy transport and intensive industry. It also contributes to managing renewable energies, as well as to the transport and storage of energy.

With a view to a decarbonised economy, the type on which most expectations are being placed is green hydrogen

Green hydrogen can be used directly or injected into the gas grid. In the latter case, thanks to its ability to be stored and transported, it can be produced at one place and at one time and used at another place at a later date, resulting in the decoupling of the production and consumption processes. 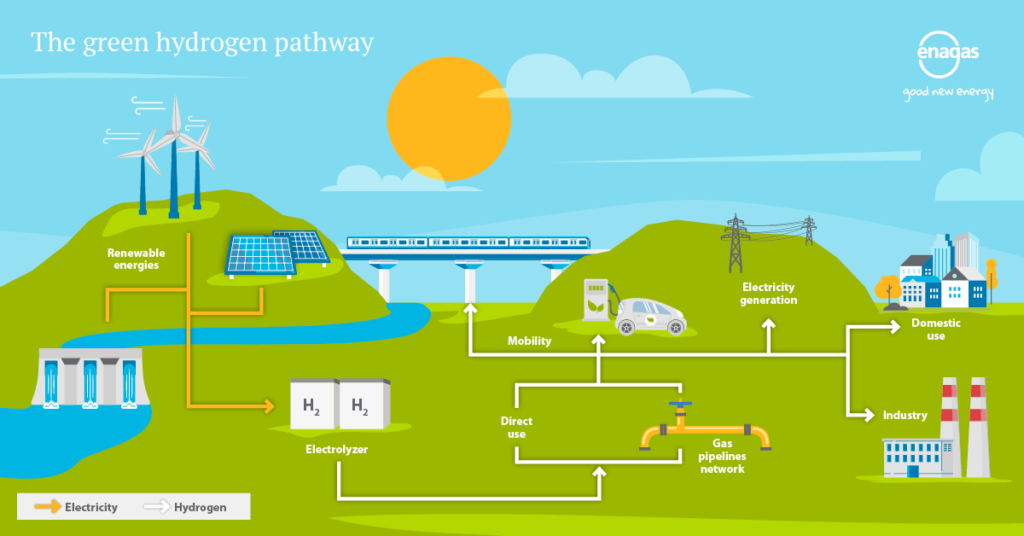 The main applications for green hydrogen include:

A shared commitment to renewable hydrogen

Green hydrogen will be key to achieving climate neutrality and a fully renewable electricity system by 2050. Globally, more than 30 countries have hydrogen roadmaps and more than 200 large-scale hydrogen projects are under development across the value chain, 85% of which are in Europe, Asia and Australia.

Over the next ten years, Europe is expected to allocate up to 30 billion euros on the roll-out of this technology.

In the case of Spain, our country has the most ambitious renewable electric energy development plan in the EU, the PNIEC, and a hydrogen roadmap. Spain also has the support of industry, as well as a large number of energy companies working on specific green hydrogen development projects.

How can we store renewable electrical energy?