The sun is life. It allows the planets to orbit, gives us warmth and light, and also enables plants to provide us with the oxygen we need to live. But the sun also gives us energy; in fact, it is an inexhaustible source of energy that has been used since ancient times.

By harnessing the electromagnetic radiation from the sun, we can obtain solar power, a renewable and clean energy source with enormous potential.

How to harness the sun’s energy

The commitment to solar energy has been reinforced in recent years for various reasons. The main one is that no greenhouse gases are emitted in its production and use, at a time when this is a particularly important issue. But also because it can be installed almost anywhere and is very versatile.

Not surprisingly, the Renewable Energies Agency claims that solar power could provide us with all the energy we need. But how can we take advantage of all this potential?

We can use it to generate electricity, to produce heat and also to generate green hydrogen, a totally renewable energy source obtained through the electrolysis of water.

Electrolysis consists of splitting the water molecule into oxygen and hydrogen by means of an electric current connected to the water. As this electric current comes from renewable energy such as solar power, it means that the whole process is sustainable, without polluting emissions, resulting in green and renewable hydrogen.

The entire process is carried out in a sustainable manner, without polluting emissions, resulting in a green and renewable hydrogen

In conventional processes, electricity generated from the sun in a photovoltaic plant is transported to an electrolyser to carry out electrolysis. However, there is a pioneering technology to generate hydrogen from solar energy in a single step: photoelectrocatalysis, which allows the process to be carried out more efficiently and economically.

This disruptive technology simplifies the production process compared to electrolysis, since the device receives solar radiation directly and, with a photoactive material, generates the electrical charges that split the water molecule into hydrogen and oxygen, without the need for intermediate steps.

The development of this new technology has been possible thanks to a team of professionals from Enagás and Repsol. Both companies have promoted the creation of a pilot project in operation at the Repsol Technology Lab in Móstoles, which has already received funding from the European Commission to scale up the technology with the construction of a larger demonstration plant at the Puertollano Industrial Complex. 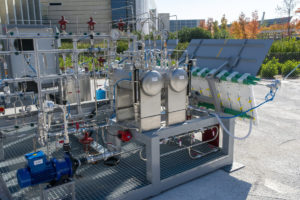 One of the major drawbacks of solar energy, as with other renewables, is that production is not constant. Solar radiation fluctuates during the day and, in addition to not producing electricity at night, atmospheric conditions also affect performance (high heat, humidity or cloudiness). Therefore, there is the risk that the solar installation will not be able to produce as much energy as needed.

Fortunately, it is possible to bridge production valleys with energy storage. Solar batteries store the energy produced after it has been generated from the sun’s radiation so that it can be used at night or in unstable weather.

When we talk about seasonal storage, i.e. large amounts of energy and long-term storage, these batteries have a limited capacity and other options are considered, such as storage with green hydrogen. This allows the stored energy to be released in a controlled manner when needed, and transported using the existing gas infrastructure, which facilitates its distribution.

The partnership between solar energy and hydrogen is key to advancing the energy transition and more sustainable economic and social development. Both renewable energies are increasingly competitive and their continued implementation will reduce emissions, create local wealth and ensure security of supply.