Chile, a country ready for the green hydrogen economy

Green hydrogen will contribute to the decarbonisation of some productive activities, such as mining and agriculture, and to achieving carbon neutrality by 2050.

Chile joins the group of countries that are in the race for green hydrogen, which it intends to make the driver of its energy future, and this has been reflected in its National Green Hydrogen Strategy.

The Chilean plan sets a target of 5 GW electrolyser capacity by 2025, producing the world’s cheapest green hydrogen by 2030, and making the country one of the top three exporters of this energy vector by 2040.

It is an ambitious plan for a relatively small country. But Chile has an important competitive advantage in the Atacama Desert, which has the highest level of solar radiation on the planet. Moreover, the south of the country is constantly buffeted by strong winds. For these reasons, Chile believes it could become the cheapest producer of green hydrogen on the planet.

The Chilean government aims to achieve climate neutrality by 2050, and its hydrogen plan can help make this a reality .There are currently more than 40 projects in the country to produce or consume green hydrogen, and – according to estimates – the national strategy will lead to the creation of some 100,000 jobs and the investment of approximately 200 billion dollars over the next 20 years.

Last November, During the presentation of the National Green Hydrogen Strategy, the Chilean Energy Minister, Juan Carlos Jobet, stated: “This new industry can achieve the significance that the mining sector has in the national economy. In addition, it will help the process of decarbonising certain productive activities, such as mining and agriculture, giving them greater international competitiveness and contributing to the goal of a zero-emissions country by 2050.”

The Chilean national strategy is based on the following pillars: 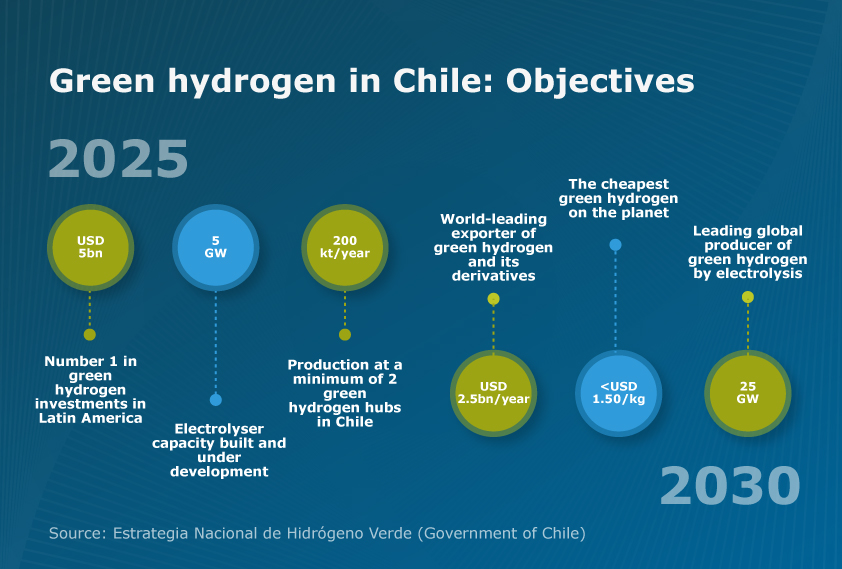 Public-private partnerships to make the country’s plan a reality

Several alliances currently exist in Chile between the public and private sectors to promote the implementation of this hydrogen strategy. Moreover, they are all aimed at consolidating the country’s position in the international arena.

The leading exponent of these alliances is represented by the association H2 Chile, of which several companies are members, including the Spanish energy company Enagás. This association aims to accelerate the energy transition by promoting the development of hydrogen technologies and their use as an energy vector in industrial, commercial, residential and mobility applications.

Chile is taking giant steps towards becoming a country with zero emissions thanks to renewable energies, especially green hydrogen

In 2020, H2Chile and Club de Innovación, also from the same country, organised the Misión Cavendish, with the ultimate goal of mitigating risks to investment and early adoption posed by the introduction of a new energy source.

Misión Cavendish served as a starting point and showcase for the presentation of green hydrogen projects and to demonstrate their many advantages. It allowed the main developments in the field to be presented, progress in pilot projects to be publicised and a series of exhibitions by authorities and developers to be held.

A number of renewable hydrogen projects have recently been announced. Enagás, ACCIONA Energía and GNL Quintero have joined forces to construct an electrolysis plant in Quintero Bay to generate green hydrogen from water and renewable electricity. The plant, that will be located at the GNL Quintero regasification terminal, will gradually increase the production depending on the demand created for green hydrogen in the area.

In this way, Chile is taking giant steps towards becoming a country with zero emissions thanks to renewable energies, especially green hydrogen.