“Women entrepreneurs can be a source of inspiration for new generations”

Julia Garrigós was one of the finalists in the 3rd edition of the Ingenia Energy Challenge, an Enagás initiative to identify innovation projects that promote energy transition and decarbonisation promoted by company employees. She currently works as a project engineer at the Enagás start-up e4Efficiency, which also emerged from Ingenia, specifically from its first edition.

In this interview she talks about, among other things, the concerns that led her to consider participating in the Ingenia Energy Challenge. Also, about her work as an engineer in a start-up company; and the reasons why she believes that the number of women entrepreneurs is still very low. 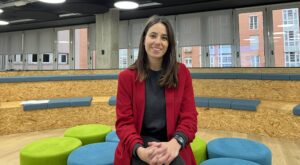 I had an idea that made a lot of sense, and in which I fully believed: a project for harnessing the coldness of LNG (liquefied natural gas) in regasification plants, which I called Nitrocold. As is natural in this type of situation, I had a lot of doubts.

I had an idea that made a lot of sense: a project for harnessing the coldness of LNG in regasification plants, which I called Nitrocold

However, to this day I can say that not having submitted my idea would have been a huge mistake, as I would not have met so many people who have become a source of inspiration and continuous learning for me. Nor would I have discovered that there is a stronger, more capable version of myself.

My project was based on obtaining low-cost nitrogen and oxygen, thanks to using the cold of LNG in the air separation process. In addition, it raised the option of using part of the nitrogen produced for self-consumption in regasification plants.

It is a project with a future, because among all the applications that exist for reusing the cold of liquefied natural gas, it is one of the most technically suitable.

Nitrocold is among the projects that e4efficiency intends to develop in the near future. For now, we are focusing on other initiatives that will allow us to position ourselves as a benchmark. Still, I remain hopeful that in the future I will be able to see it become a reality.

I think there are several reasons for this. First, there is a gender gap in STEM careers, which means that there are fewer women with a background in new technologies, science or engineering, and this is the basis for the vast majority of start-ups that are created.

Second, the lack of visibility of female role models in the start-up ecosystem can generate a lack of confidence and security in our leadership abilities. It is therefore necessary to focus on women entrepreneurs. They can be a source of inspiration for new generations.

You combine your entrepreneurial side as a project engineer in the start-up e4efficiency. What is your role within the company?

I am currently a project engineer at e4efficiency. I carry out technical calculations and study design alternatives. However, being part of the entrepreneurial ecosystem of a start-up like e4efficiency has allowed me to carry out contract management tasks, customer and supplier relations, management of subsidies, contractor coordination, and so on.

All of this is invaluable training for becoming an entrepreneur, which I value highly, and I believe it will equip me with the necessary tools to one day take a new step towards entrepreneurship.

The strength of e4efficiency is the great differential value of its product: an ecological cooling energy generated from the cold of liquefied natural gas at a temperature of -160ºC, considerably reducing the carbon footprint of our customers.

e4efficiency it has a patented technology that can offer all types of cold-consuming companies a sustainable, efficient and cost-effective energy alternative

e4efficiency is of interest to the market because it has a patented technology that can offer all types of cold-consuming companies a sustainable, efficient and cost-effective energy alternative.