Some 56% of the world’s population lives in cities, a figure that is growing steadily and is expected to reach 68% within thirty years. Considering that, according to the UN, urban areas emit most greenhouse gases, consume most of the resources—both energy and water—, require up to 75% of the energy produced, and are also a source of inequalities, a way must be found to maintain a beneficial balance for all inhabitants and for the ecosystem.

One of these solutions is smart cities, of which we are seeing more and more examples.

What is a smart city?

Smart cities ensure that the needs of all citizens are met without compromising those of future generations. Thus, the term smart city, often translated as “efficient city”, refers to urban centres that, in different ways, are committed to sustainable development.

The ways to achieve this sustainability may vary, but they all have a common denominator: a strong ecological and circular nature, in which energy is a key element. In this regard, the differential areas of smart cities are the following:

Smart cities ensure that the needs of all citizens are met without compromising those of future generations.

Cities are major consumers of resources, so one of the main ways to ensure their sustainability is the type of energy with which they are supplied. A city cannot be sustainable if the energy it consumes is not sustainable. Therefore, when we talk about smart cities, we are talking about cities that operate on the basis of efficiency and renewable energy.

Although in recent years the creation of smart cities from scratch has become popular, such as Masdar (Abu Dhabi) or AI City (China), the most practical examples can be seen in existing cities that are moving towards this quality. That is where the key to making cities sustainable lies; in transformation.

In Spain we have a good example. Mallorca is developing the Green Hysland project, which aims to deploy a hydrogen ecosystem on the island, becoming the first green hydrogen hub in Southwest Europe. The project includes the entire value chain and the necessary infrastructures for the production of green hydrogen from solar energy and its distribution to end users: tourism (hotels), transportation, industrial and energy sectors. It also aims to inject this renewable hydrogen into the island’s gas grid to generate heat and green energy.

Also in places such as Reykjavik, Iceland, they get almost all the electricity they need from fire (thermal energy) and ice (hydropower). Or in Burlington, the most populated city in the state of Vermont, USA, which has managed to supply its more than 42,000 inhabitants with energy from renewable sources alone. 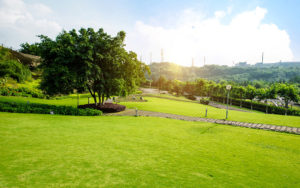 Another parameter that determines the sustainability levels of a city is found in its mobility and transportation supply.

Traffic plays a major role in the impairment of living quality in cities, regardless of their size, as it is an important generator of pollution that worsens air quality.

Spain has opted to introduce measures to regulate traffic, especially limiting the access of polluting vehicles to urban centres, and also for the introduction of fleets of sustainable vehicles: electric or powered by natural gas or renewable gases.

Madrid has a growing fleet of CNG-powered buses; Pamplona uses biomethane from the Imarcoain waste plant and biogas from the Arazuri wastewater treatment plant in its public transport; Barcelona is a pioneer in the use of hydrogen in municipal transport through buses and public refuelling stations.

Natural gas has also positioned itself as a sustainable alternative for heavy, maritime and rail transport. In this regard, Huelva has a port that, in addition to being an LNG logistics hub, is promoting a green corridor for rail freight transport.

Another major problem resulting from the concentration of population is the amount of waste generated. For this reason, waste management under a circular economy model is also of huge relevance in any smart city. This involves responsible consumption initiatives, recycling, energy recovery, repair of items, etc.

One of the options that has been gaining ground in recent times is the energy recovery of waste, i.e., converting waste into energy sources. A clear example of circular economy. A clear example of circular economy. This occurs with biogas/biomethane, a renewable gas that is obtained from biodegradable waste and is a renewable, local and storable source of energy supply that has a positive impact on employment and the rural economy.

In Spain we have several cases of energy recovery from waste and renewable energy generation. The ‘Unue’ project in Burgos is aimed at transforming biogas into biomethane for subsequent injection of this renewable gas into the gas pipeline network of the Spanish gas system.

The Regional Government of Valencia (Generalitat Valenciana) is also developing a circular economy project based on rice straw. This will lead to the production of 87 GWh per year of renewable gas to be injected into the gas infrastructure. This is the equivalent to more than 15% of the natural gas consumption of the city of Valencia

Belgium updates its hydrogen strategy in anticipation of European legislation