How can waste be turned into energy?

The generation of renewable gases, specifically biomethane, which are obtained from different types of waste is one way of promoting a circular economy in Spain, to enable us to meet the targets established in the new European Union waste directive.

Biogas obtained from biodegradable waste is a renewable, local and storable source of energy which has a positive impact on employment and the rural economy.

Following cleaning and separation of CO2 (upgrading), the biogas is converted into biomethane, a fully renewable clean gas that is suitable both for transmission by pipeline and for use as a vehicle fuel. It is therefore an attractive form of energy production that means we can move towards the decarbonisation targets set by the European Union.

The use of renewable gas in existing gas infrastructure, combined with renewable electricity, has the potential to reduce energy transition costs.

The British National Grid estimates that at least 15% of all the gas consumed in the world could be produced from different elements such as wastewater, food scraps and organic waste created by companies. In the United States, a 2011 analysis produced by the Institute of Gas Technology found that renewable gas from waste biomass (generated by human activities using organic matter) has the potential to add up to 733 GWh per year, enough to meet the natural gas needs of 50% of American homes.

The use of renewable gas in existing gas infrastructure, combined with renewable electricity, has the potential to reduce energy transition costs.

In Spain we are already taking the first steps in the technological development of this type of energy. The generation of biomethane from waste is a means of developing the circular economy, which is increasingly necessary in Spain for a number of reasons:

So what are we going to do with the other 90%? The situation requires immediate solutions and the generation of renewable gas from municipal solid waste, wastewater or livestock or forestry waste offers an efficient and highly environmentally friendly alternative.

The generation of biomethane from waste is a way of developing the circular economy, which is increasingly necessary in Spain.

To achieve this, it is essential to commission plants that manage this waste properly through biogas production and subsequent upgrading to biomethane. Although this type of energy use is widespread in Europe, in Spain there are only about 300 biogas plants (compared to 20,000 in other European countries), which are also generally used for self-consumption of energy. The only case of biomethane production with injection into the natural gas transmission network is the Valdemingómez plant in Madrid, where approximately 100 GWh of renewable gas is injected into the gas network every year.

The generation of biomethane from waste is a way of developing the circular economy, which is increasingly necessary in Spain.

In Spain it is estimated that there is biomethane production capacity of more than 26,000 GWh. This amount would be sufficient to supply 40% of households or, to give another example, all the urban bus fleets in Spanish cities. 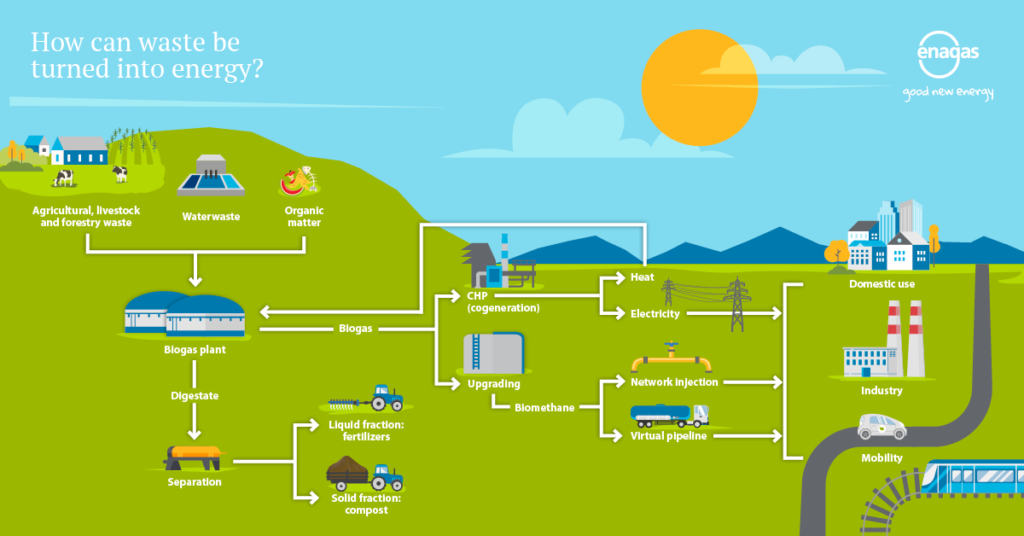 How is biomethane produced?

Biomethane can be produced through three main processes:

This is a biological process that occurs in the absence of oxygen in which the organic matter in the waste is transformed by the action of a group of microorganisms into a mixture of gases – biogas – and a product called digestate, which is used as fertilizer for soil or to manufacture fertilizers.

Once biogas is obtained, it is purified to eliminate CO2 and impurities and to produce a biomethane suitable for injection into the gas network.

Gasification is a thermochemical process based on the thermal decomposition of matter with a low moisture content. Forestry waste, food industry waste and even waste from used tyres and non-recyclable plastics are used to produce a gas called syngas. This gas, which consists mainly of H2, CO2, CH4, CO and impurities, undergoes a methanisation process in which CO and H2 react to form CH4 and H2O.

Green hydrogen is generated following water electrolysis by means of electrical energy from renewable sources. Through a process that makes hydrogen (H2) and carbon dioxide (CO2) react at high temperatures and pressures to transform them, synthetic natural gas can be produced.

The result is clean energy for multiple applications in both industry and the home.

The challenges of COP27 in Egypt

How will diversity be of great help for the energy transition?