Just a few months ago work began on construction of the first liquefied natural gas (LNG) supply ship to be manufactured in Spain. This is a project co-financed by the EU through the CEF facility coordinated by Enagás, and spearheaded by the shipping company Knutsen OAS Shipping AS, Port de Barcelona and Scale Gas, a subsidiary of Enagás.

The ship is being built at the Armon Shipyard in Gijón and once operational -scheduled for 2022-, it will be chartered by Shell España SA and will use the LNG terminal that Enagás has at Barcelona Port for the loading and subsequent supply of LNG to ships docking at the port or making refuelling stops before continuing their route.

Within the sector, LNG is presented as the only real alternative in the move towards decarbonisation. It reduces polluting emissions to the minimum, eliminating 100% of sulphur oxide (SOXX) emissions, while reducing nitrogen oxide (NOXX) emissions by 80–90% and CO2 emissions by 20–30%.

Thus, in addition to promoting more sustainable maritime transport and improving air quality, the construction of this ship allows Spain to continue to consolidate its position as a European benchmark in LNG bunkering.

By using LNG as a maritime fuel in Spain, we estimate avoiding the emission of between two and four million tonnes of CO2 through to 2030. 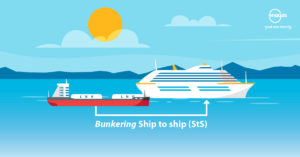 The vessel under construction will allow LNG supply operations from one ship to another.

The International Maritime Organisation (IMO), a UN agency that works to develop and maintain a comprehensive regulatory framework for international shipping, reported in its Fourth Greenhouse Gas Study 2020 growth of 9.3% in CO2 emissions associated with this sector over the 2012-2018 period, to 1,056 million tonnes. IMO then adopted an initial strategy to reduce greenhouse gas emissions from international shipping. The EU Parliament also followed suit, last year voting for a 40% reduction in CO2 emissions from shipping by 2030. Among the measures included in the European action plan is a call for the creation of an Ocean Fund financed by revenues from the EU Emissions Trading Scheme (ETS) to make ships more energy efficient by 2030.

There are numerous initiatives that promote sustainability in maritime transport. The CORE LNGas hive is one of them. Driven by the EU, it supports development of a safe and efficient integrated logistics and supply chain for LNG (small scale and bunkering) in the transport industry, particularly the maritime transport of the Iberian Peninsula.

In 2020, the EU Parliament voted for a 40% reduction in CO2 emissions from maritime transport by 2030

It is a public-private initiative, with a total of 42 partners, which contributes to decarbonisation of the European Mediterranean and Atlantic corridors. Thanks to this initiative, and to the second part of the project (LNGHIVE2) of which this ship forms part, LNG bunkering operations in Spain practically quadrupled in 2020 compared to 2019; and all seven regasiﬁcation plants in Spain are adapted to supply LNG in transport, as are some ports, barges and tugboats, port cranes and trains.

There are currently a total of 15 LNG supply or bunkering barges around the world, six of which operate in Spain. The first ship built within our borders will soon join them, a milestone in the history of sustainable maritime transport in our country.

How artificial intelligence can help the energy sector