LNG bunkering for the decarbonisation of the seas

A direct successor to the stowage of fuel in ships and steam locomotives of the First Industrial Revolution, this Anglo-Saxon term represents a great opportunity to meet the European Union’s environmental objectives thanks to LNG for maritime transport.

The need to establish strategic supply points with coal storage facilities came about with the popularisation of steam as a means of land and maritime transport in the industrialised world. These storage facilities, known as “bunkers”, ended up giving their name to the fuel used to generate the steam and, over time, to anyone employed in shipping. The supply of that fuel was then named “bunkering”.

Now, with the new European regulations that were introduced in January 2020 restricting the sulphur content of fuel oil used by ships, this word regains importance associated with the promotion of strategic initiatives for the use of liquefied natural gas (LNG) for maritime transport. The regulations limit the emissions of this substance to 0.1% in ECA zones (Baltic Sea, North Sea and US and Canadian coastlines) and to 0.5% in the remaining zones.

The control will apply to main and auxiliary engines, and to boilers and inert gas generators, something that, once the current Ports Law is adapted to the new European Regulations, will lead to an improvement in health and the environment, especially for the populations near ports and coasts and for the oceans themselves, and will limit the use of conventional hydrocarbons.

In the restrictive context of petroleum-based fuels, gas is a sustainable and viable alternative for mobility in the short-term allowing CO2 emissions to be reduced and the energy transition to be addressed in the near future. There is plenty of LNG; it is economically competitive and has a lower environmental impact, allowing the decarbonisation objectives set by the European Union to be met. In fact, the European Commission has announced it will co-finance approximately 20 million euros to support, among others, two Spanish bunkering projects.

The future of liquefied natural gas as a maritime fuel is so promising because of the advantages it offers, which go beyond the naval sector itself.

Through the Connecting Europe Facility (CEF), the EU will support two bunkering developments in the ports of Algeciras and Barcelona coordinated by Enagás, within the institutional strategy ‘LNGhive2’ led by the Spanish Ports Authority, to promote more sustainable and efficient transport. It aims to enhance the development of the market for LNG as a maritime fuel and to ensure supply in ports.

This aid underlines Europe’s endorsement of the role of natural gas in the decarbonisation of the maritime sector with a view to meeting the climate targets set by the European Green Deal. With CEF funds, the EU is prioritising short sea shipping projects using alternative fuels and the installation of shore-side energy supply systems.

Through the CORE LNGas hive projects and the LNGhIve2 strategy projects that support developments in the use of LNG and LNG bunkering in Spain, around 300 million euros are invested in total, of which around 68 million are co-financed by the European Commission.

Beyond the valuable institutional support, the number of bunkering operations keeps growing every year. In 2020, bunkering operations have increased 5.2 times from 108 operations in 2019 to 562 operations at the end of September. Also, the volume supplied has almost doubled from 59,503 m3 in 2019 to 98,788 m3 in 2020. In this scenario, the International Energy Agency (IEA) estimates sustained growth in global demand for liquefied natural gas for the maritime sector over the coming decades. The IEA forecasts that the consumption of gas as a maritime fuel will be 10 Mtoe (mega tonnes of oil equivalent) between 2020 and 2030 and its consumption will continue to grow until 2040.

In September, the company Baleària launched the world’s first fast ferry for passengers and cargo powered by natural gas, the “Eleanor Roosevelt”. This ship joins the world fleet of 170 LNG-powered boats. Furthermore, there are 222 on order and 126 labelled “LNG ready”. To meet this level of demand, it is estimated that there will be an exponential increase in the number of tankers in the coming years. Of the 182 refuelling ships currently in the world, there are expected to be 1,500 by 2030. 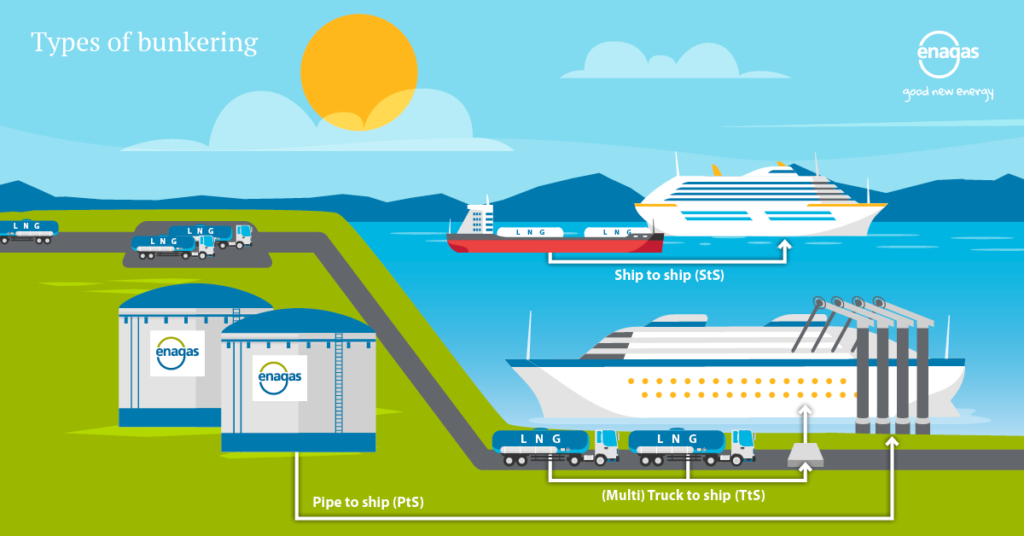 The future of liquefied natural gas as a maritime fuel is so promising because of the advantages it offers, which go beyond the naval sector itself. To begin with, it is the cleanest fuel among those currently available for large freight and passenger ships. Compared to traditional fuels, LNG minimises pollutant emissions of nitrogen and sulphur oxides: it eliminates 100% of sulphur oxide (SOX) emissions and reduces nitrogen oxide (NOX) emissions by 80-90% and CO2 emissions by 20-30%; saving two million tonnes in a decade.

Economically, LNG costs up to 30% less than traditional fuels. Furthermore, although adapting LNG to the maritime sector involves a high initial investment, due to its competitive cost, the payback periods are small: three to seven years for new ships and three to eight years for refurbished ships, taking into account an average useful life of 25 years.

Finally, the increasingly widespread use of gas-based bunkering has increased the possibilities of refuelling in virtually all Spanish ports with initiatives such as CORE LNGas hive. It is a growing practice with more and more possibilities and quality technical solutions.

Although there are various ways of transferring the fuel to ships, there are three main forms of bunkering or supplying liquefied natural gas (LNG) in ships and/or terminals adapted through the project CORE LNGas hive.

How artificial intelligence can help the energy sector